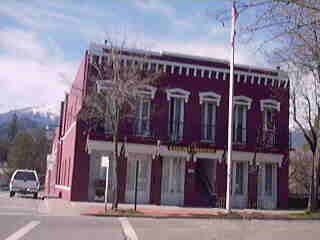 Trinity County is a large, rugged and mountainous, heavily forested county located in the northwestern portion of California. It harbors the Trinity River and is among the Salmon/Klamath Mountains. It covers an area of over two million acres. As of the 2010 census its population was 13,786, up from 13,022 at the 2000 census. The county seat of Weaverville is the largest town in Trinity County, which has approximately 3,500 people.  Trinity County has no traffic lights, freeways, parking meters, or incorporated cities; it had no chain stores or chain restaurants until 1999, when Burger King, Movie Gallery (which since closed), Longs Drugs (now CVS/pharmacy), and Subway opened for business.   Weaverville has the distinction of housing some of California's oldest buildings - including the courthouse, which was built in 1856 and is the second oldest in the state (it is the oldest working courthouse in the State of California); the Weaverville Drug Store has been filling prescriptions since 1852; and the Joss House is an historic Taoist temple built in 1873.

When you are arrested for a DUI in Trinity County California, there are numerous people and agencies that may be involved in your processing and prosecution.